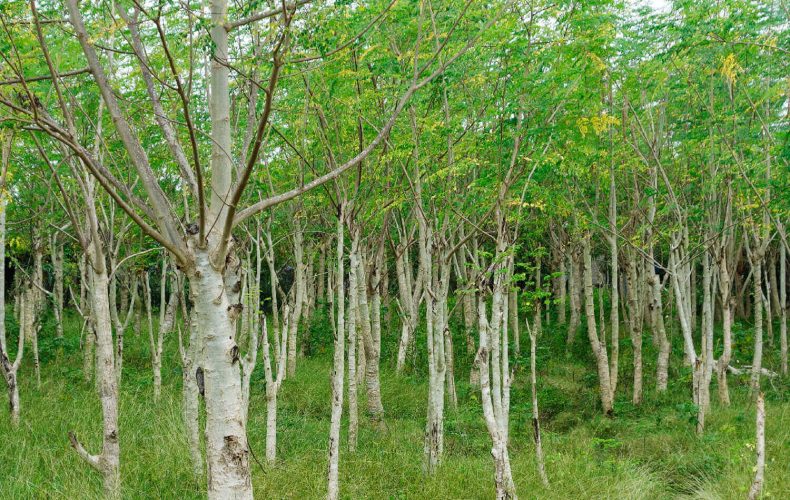 The moringa tree is grown mainly in semiarid, tropical, and subtropicalareas, corresponding in the United States to USDA hardiness zones 9 and 10. It tolerates a wide range of soil conditions, but prefers a neutral to slightly acidic (pH 6.3 to 7.0), well-drained sandy or loamy soil.In waterlogged soil, the roots have a tendency to rot.

Moringa is a sun- and heat-loving plant, and does not tolerate freezing or frost. Moringa is particularly suitable for dry regions, as it can be grown using rainwater without expensive irrigation techniques.

Moringa is grown in home gardens in West Bengal and Odisha and as living fences in southern India and Thailand, where it is commonly sold in local markets. In the Philippines and Indonesia, it is commonly grown for its leaves which are used as food. Moringa is also actively cultivated by the World Vegetable Center in Taiwan, a center for vegetable research. In Haiti, it is grown as windbreaks and to help reduce soil erosion.[c

More generally, moringa grows in the wild or is cultivated in Central America and the Caribbean, northern countries of South America, Africa, Southeast Asia and various countries of Oceania.

As of 2010, cultivation in Hawaii, for commercial distribution in the United States, is in its early stages.

In tropical cultivation, soil erosion is a major problem. Therefore, the soil treatment has to be as shallow as possible. Plowing is required only for high planting densities. In low planting densities, “it is better to dig pits and refill them with the soil. This ensures good root system penetration without causing too much land erosion. The pits must be 30 to 50 cm deep, and 20 to 40 cm wide.

Moringa can be propagated from seed or cuttings. Direct seeding is possible because the germination rate of M. oleifera is high. Moringa seeds can be germinated year-round in well-draining soil. Cuttings of 1 m length and at least 4 cm diameter can be used for vegetative propagation.

For intensive leaf production, “the spacing of plants should be 15 x 15 cm or 20 x 10 cm, with conveniently spaced alleys (for example: every 4 m) to facilitate plantation management and harvests. Weedingand disease prevention are difficult because of the high density. In a semi-intensive production, the plants are spaced 50 cm to 1 m apart. This gives good results with less maintenance.

Moringa trees can also be cultivated in alleys, as natural fences and associated with other crops. The distance between moringa rows in an agroforestry cultivation is usually between 2 and 4 m.

The different breeding aims result in a different selection. India selects for a higher number of pods and dwarf or semidwarf varieties. Breeders in Tanzania, though, are selecting for higher oil content.

M. oleifera can be cultivated for its leaves, pods, and/or its kernels for oil extraction and water purification. The yields vary widely, depending on season, variety, fertilization, and irrigation regimen.

Moringa yields best under warm, dry conditions with some supplemental fertilizer and irrigation Harvest is done manually with knives, sickles, and stabs with hooks attached.Pollarding, coppicing, and lopping or pruning are recommended to promote branching, increase production, and facilitate harvesting.

When the plant is grown from cuttings, the first harvest can take place 6–8 months after planting. Often, the fruits are not produced in the first year, and the yield is generally low during the first few years. By year two, it produces around 300 pods, by year three around 400–500.

A good tree can yield 1000 or more pods. In India, a hectare can produce 31 tons of pods per year. Under North Indian conditions, the fruits ripen during the summer. Sometimes, particularly in South India, flowers and fruit appear twice a year, so two harvests occur, in July to September and March to April.

Average yields of 6 tons/ha/year in fresh matter can be achieved. The harvest differs strongly between the rainy and dry seasons, with 1120 kg/ha per harvest and 690 kg/ha per harvest, respectively. The leaves and stems can be harvested from the young plants 60 days after seeding and then another seven times in the year. At every harvest, the plants are cut back to within 60 cm of the ground.[In some production systems, the leaves are harvested every 2 weeks.

The cultivation of M. oleifera can also be done intensively with irrigation and fertilization with suitable varieties.[ Trials in Nicaraguawith 1 million plants per hectare and 9 cuttings/year over 4 years gave an average fresh matter production of 580 metric tons/ha/year, equivalent to about 174 metric tons of fresh leaves.[

One estimate for yield of oil from kernels is 250 l/ha.

The oil can be used as a food supplement, as a base for cosmetics, and for hair and the skin.